A couple of weeks ago I went to a political afternoon at a friend’s house…
to meet the new local representative for Labor
as a lead up to an election that will take place later this year.
I don’t want to bore you with politics, however a little background is necessary.
In a nutshell……..3 days prior to this function, our PM (Julia),
representing the Labor Party in Australia,
called an internal caucus meeting to decide on the party’s leader, and to end internal bickering.
The deal was that whoever lost was to leave politics.
So, as a result, Julia is no longer leading our country…and is leaving altogether.
On arriving at the function I was asked if I would design and make a card that would show our gratitude for all that she accomplished during her time as PM.
As a way of saying “thankyou”
So I said yes! Ok! It would be my honour!
Then I panicked!
Got excited…
Got scared…

I skyped Shirley in Ireland…swore heaps and said what do I do???
Her advice was to make a list of words to describe her and go from there.
And that is exactly what I did.
The common thread was her passion
~ so hearts represent the passion.
Pioneering leadership for women and copping so much flack on a sexist basis
~ that is the woman, representing suffragettes.
Her femininity
~ that is the pink and burgundy.
Her love for Australia
~ is the flowering gums
Her strength of character and nerves of steal
~ are the diamonds.
And I have left an opening to the right
~ which represents a passageway to whatever future she chooses to have. 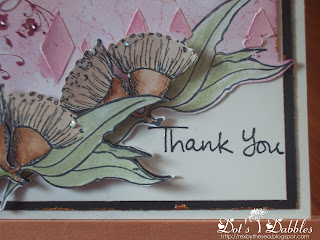 All the flowering gums are cut out and raised to add movement and life to the leaves.
The lady has been coloured with DI’s which were tinted with copper Perfect Pearls Mist, instead of water, and painted on.
Bleach was added around the flourishes for depth.
The diamonds are from the harlequin mask and I have used grunge paste and then coloured it.
And a little glitz and glamour to finish it off.

I hope I haven’t bored you too much,

but because this card was a specific brief I thought I would explain my thinking during the process.
I really did enjoy making this card
and I am very satisfied within myself for how it has turned out.
Enjoy! 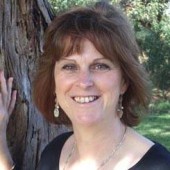 Feel free to subscribe to this blog for the latest posts.